If you’re coming to Barcelona then you’ll almost certainly end up running into some of the city’s modernist architecture sights. But you can help yourself by planning out a route that’ll take you around some of the most beautiful modernist sights in Barcelona – and that’s exactly what Marriott International put together for the perfect Gaudí-inspired treasure hunt.

*Don’t miss the interactive map at the bottom of this post.

After a quick drink at the Cotton House Hotel, we were off to discover the top architectural wonders in the Catalan capital.

With an hour or two and a comfy pair of shoes, this gentle stroll will lead you around the highlights of Barcelona’s legendary modernist movement.

Here’s how you can plan out your very own architectural adventure around Barcelona’s most famous and inspiring buildings,

The starting point for your tour sits on the lower section of Passeig de Gràcia, the fanciest street in all of Barcelona.

Casa Lleó i Morera was a remodeling job of a 19th-century family home carried out by architect Lluis Domènech i Montaner. Today, it’s missing some of the original sculptures and features he created, but it’s still got a gorgeous stained-glass framed gallery on the first floor.

Next, we’ll visit one of Gaudí’s most well-known projects – which just so happens to be literally steps away from Casa Lleó i Morera. Casa Batlló is locally known as the “House of Bones” for the skeletal structures on its façade. It’s just as colorful inside as out, and it’s well worth a visit in the summer months, when a “Magical Nights” concert series is hosted on the building’s rooftop.

Turn left onto Carrer de Aragó to take a look at this curious art museum. Named after Catalan painter Antoni Tàpies, this building is half industrial sternness, half artistic quirkiness. Current exhibitions include a film series on empathy, an exhibition of prototypes from different artistic and cultural groups and plenty of stuff that Tàpies himself did.

Turn right back around to keep going up Passeig de Gràcia. The fourth building you’ll be feasting your eyes on is La Pedrera, another one of Gaudí’s most famous projects. Also known as Casa Milà, the most outstanding feature of this house is the undulating rooftop filled with swirling towers. It also affords you a rather nice view of the grand avenue below.

Right at the very top of Passeig de Gràcia, you’ll find this grand hotel. It promises its guests luxurious experiences beyond its doors, but even if you’re not staying here, it’s worth a stroll by to see it. It features a café filled with Art Nouveau furniture that hosts jazz concerts once a week.

Designed by Salvador Valeri i Pupurull

After the hotel, turn around and double back down Passeig de Gràcia until you get to Carrer de Corsega. Make a left, and you’ll quickly come to a colorful building with large archways and topped off with a swooping rooftop. What isn’t quite as noticeable is the less colorful but no less impressive second side of the Casa Comalat, which you can get to by turning right onto Carrer de Pau Clarís and then right again onto Avinguda Diagonal. You may be surprised that two such different sides are really part of the same building!

Designed by Josep Puig i Cadafalch

Your next – and next to last  – visit is also on Avinguda Diagonal. “The House of Spikes” is definitely off the beaten tourist trail and makes a great stopping point between the last sight on your tour.

It’s named for the six spiky towers that sit atop the building, and it was built to join together three houses owned by sisters. At the moment, you can’t go inside the building, but it’ll be opening up for visitors soon. Until then, savor the intricate details inspired by nature that are carefully moulded on the facade.

What could make a more spectacular ending point to your trip than the Sagrada Familia? Gaudí’s famously unfinished church is the biggest and possibly most impressive of all the the architectural sights in Barcelona. Finish here, and perhaps enjoy a drink or something cool in the shade in the park in front of the church as you admire its towering spires.

And with that, our modernist treasure hunt has officially come to a close – and in a fairly spectacular location as well. Follow along this little route, and you’ll put yourself in a great position to be pleasantly surprised by some of Barcelona’s world-class architectural sights. 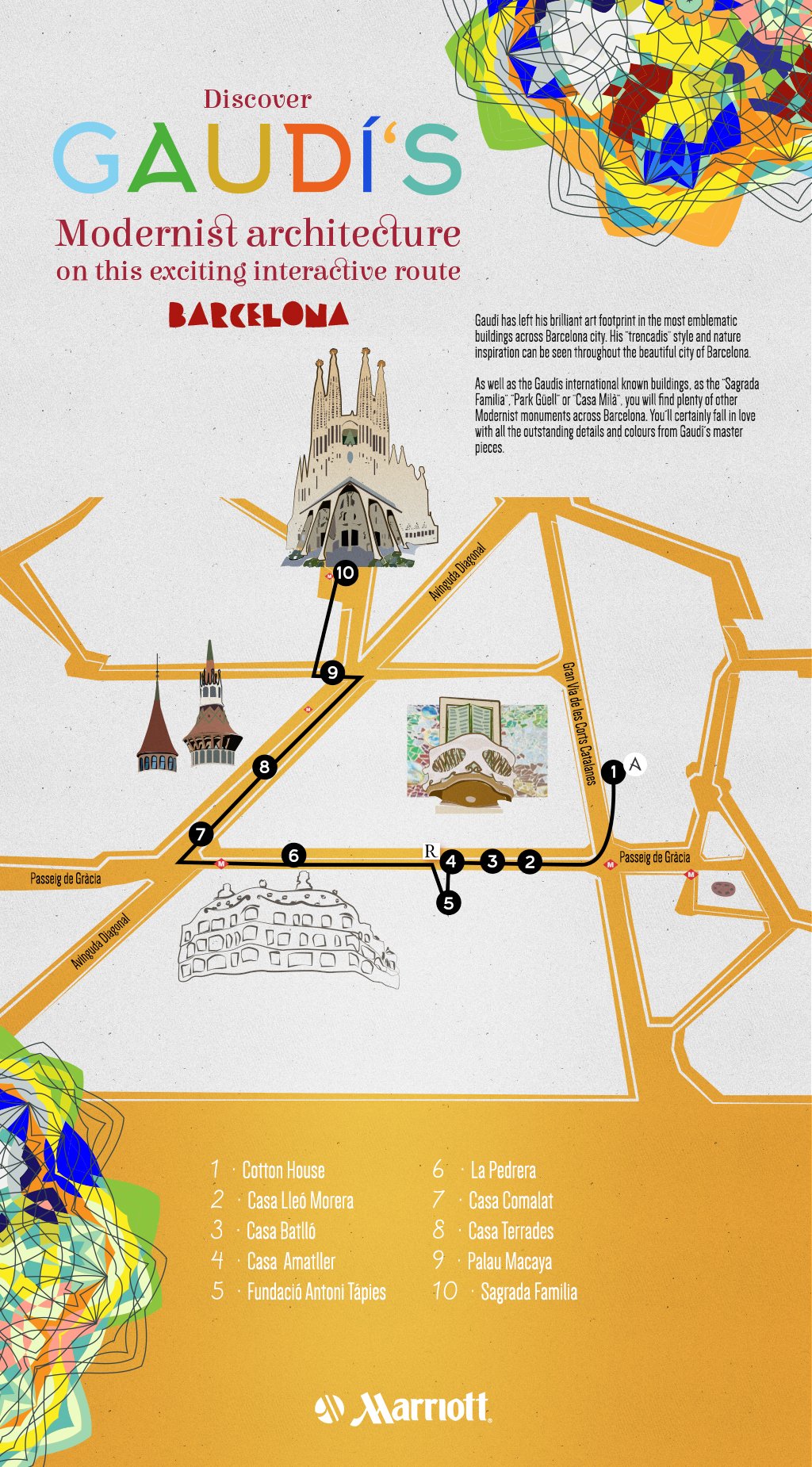 Source: Gaudí´s route across Barcelona by Hotels Marriott, in Barcelona

P.S. See more content about the route by using #FindingGaudi.

Categories:Things to Do in Barcelona